I met a Goddess in Nepal

Excerpt from a tour participant's blog about her tour to Kathmandu. If you are interested in coming on my next pilgrimage, please visit my tour website. 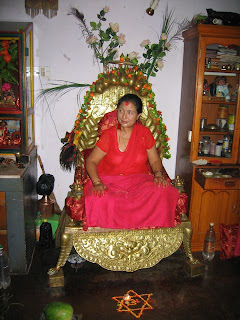 Spending some time so close to the Mother Goddess's greatest natural monument was a constant reminder of the divine feminine.  In fact, that's what I was seeking on my pilgrimage there.  My personal guide was a lovely, smart, western woman named Yana, who has visited Nepal numerous times.  Yana converted to Tibetan Buddhism when she was fourteen years old, and is faithful still.  Clearly it was no adolescent fad.  Nor is her reverence for female deities.  She knows her stuff and led me on a magical journey to Hindu and Buddhist temples and power spots richly endowed with goddess-worship and lore.

My first ten days in Kathmandu were during the festival of Dasain, which pays homage to the various manifestations of the fierce and heroic Goddess Durga.
Families get together and celebrate the Great Goddess Durga in her many forms through feasting and animal sacrifice, the latter ritual being a sad irony that didn't escape me.  But I remained silent and respectful, which was a much better place from which to observe and learn.  The silence imposed upon me by illness prepared me for what would turn out to be the most profound experience I was to have in Nepal. 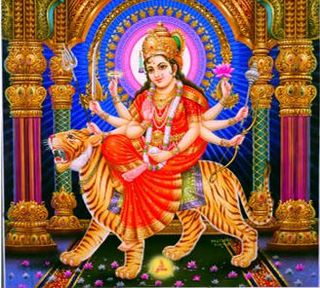 Yana took me to meet Kusali Devi, a Newari Buddhist teacher and shaman.  Newari is a uniquely Nepali combination of Tibetan Buddhism, Shaktism, which focuses on Hindu worship of the divine feminine, and Bon, the ancient, indigenous religion of Tibet.  Kusali Devi is considered to be a "living goddess," embodying Ajima, the goddess who is both mother and grandmother in the Newari pantheon, and a fierce protector of children.  Kusali is a beloved spiritual leader in the Kathmandu valley, and is consulted by her many followers for spiritual and physical healing.  My first visit with her was the day after the 48th anniversary of Kusali's possession by Ajima, an auspicious time for sure.

Yana and I arrived at Kusali's apartment shortly after she had performed a puja (prayer) for dozens of her followers who were there for blessings of the festival.  After all the visitors had left, Yana and I, along with our translator, Basant, entered a small flat which was simply adorned with religious objects and icons of the Newari tradition.  Kusali sat cross-legged on a large, brass throne, dressed in a vivid red and gold sari.  Her expression was warm and open.  Almost as soon as I laid eyes on this serene and mature woman I began to relax.  I found a spot on the floor against the wall, sat down and watched the proceedings unfold.  After Yana and Kusali exchanged words and news through Basant, Kusali blessed Yana as she kneeled before her.  Two attendants, a man and a woman, assisted Kusali by tying a red ribbon around Yana's neck, (red is Durga's favourite colour) and applied a tika - a large red dot made of thick paste - unto Yana's forehead directly over the third eye.  It was all so fascinating that I just sat there with a silly grin on my face.  Yana then turned to me and asked if I'd like to be blessed as well.  I replied in the affirmative and knelt before Kusali.

After an eye-opening week and a half in Nepal I no longer expected to be enraptured.  I had no more delusions of being "touched by the divine."  Or so I thought. When Kusali had finished her blessing she asked if there was anything else she could do for me.  I dismissed the idea of asking her to pray for my career - it seemed so materialistic and mundane - so I requested a puja for my home.  I wanted a good night's sleep, which had been eluding me for months.  She assured me she would perform the puja as requested, and told me to come back in a week to pick up an offering for my altar.  (I liked the simple fact that she assumed, or perhaps actually knew, that I had an altar, because I do.) Before taking my leave, I had one more small request.  I asked Basant if it would be alright to have my picture taken with her.  He looked very slightly taken aback for only a moment, and then translated what I'd asked.  Kusali gave her consent.  I handed my camera to Basant who took a picture of Kusali on her throne, and me sitting on the floor beside her.  After thanking her and bidding our farewells, Yana, Basant and I went to the rooftop of the apartment building to eat some prasad, food that is sanctified by a deity or holy person, in this case Kusali Devi herself.

As we ate our prasad, Basant told me he was very surprised that Kusali consented to have her picture taken.  Although he didn't say it in so many words, I got the feeling it was one of those things that "just isn't done." . . .  I suddenly realized something unusual had taken place.  What I originally thought was a very pleasant and interesting occasion turned out to be extraordinary, even sacred.  A frisson of recognition coursed through me.  In that moment I felt special. 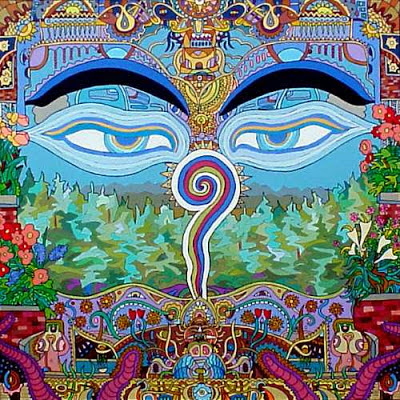 For days after meeting Kusali Devi I kept checking my camera to make sure the photograph was still safely stored.  I loved looking at the poised, self-possessed woman who gazed directly into the lens as if to say "I see you. I know you."  Those feelings and impressions were still with me when Yana and I visited Kusali less than a week later to get the offerings she had made for us.
Kusali gave Yana offerings for her upcoming wedding, and some medicine for one of her clients.  (Yana is a registered hypnotherapist.)  Then it was my turn to receive the gift for my altar, which was an earthy, hemp-like incense made for cleansing my home.  Kusali then unexpectedly offered me some medicine to "make me happy."  She instructed me to add a bit of the fine powder to some water before meditation, and my spirits would be lifted.

Thinking our audience was over, I thanked her again, but she continued to speak.  I didn't understand anything except for the word "psychology," which she said twice during her discourse on me and my situation.  The translator, who was a young woman this time, informed me that Kusali had referred to my "psychological problems," and that both the incense and medicine would help me to find some peace.  My curiosity turned to astonishment.  I hadn't come to Kusali for healing of any kind, but she chose to address that anyway.

I have a long history of garden-variety depression that has plagued me most of my adult life.  In its less intense forms I sometimes refer to it as the "wobblies."  But I haven't been wobbly, at least not in any serious way, for a long time now.  My life is on an upswing and my path is clearer than it's ever been.  Okay, sure -  my introduction to Nepal was highly charged with emotion, but both times I was in Kusali's presence I was courteous, quiet, and completely at peace.  Yet she saw through that.  A living goddess looked right into me and saw my soul.

Everyone wants some form of recognition or acknowledgement, and I have an embarrassing history of needing a lot of it, probably more than most.  I'm an actress and writer, so of course recognition is important and necessary if I want to actually make a living at it, but my excessive need for attention goes all the way back to childhood.  It was as if Kusali Devi had read a map of my inner journey, and then gave me exactly what I've wanted and needed all my life.  Nothing could have been more appropriate than allowing a vain, self-absorbed actress to have a picture taken with a goddess, and she knew it.  Like most of the gifts I received in Nepal, I didn't even know how exceptional it was until later.  The photograph she allowed me to take, which I've had printed and framed, will always be one of my most prized possessions. 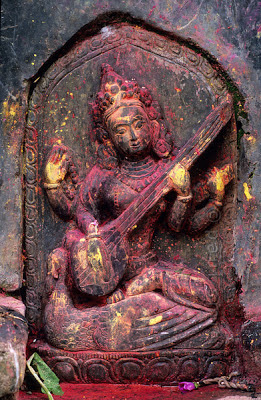 Kusali Devi's glimpse into my soul validated me.  I guess I had to fall from The Tower in order to be lifted out of the rubble by her divine, guiding hand.  The card after the Tower in the tarot happens to be the Star, a symbol for hope, renewal, spiritual love, and the healing of old wounds.  All of that is exactly what I got from meeting a living goddess face to face.

I suppose all this sounds about as airy-fairy as I get on this web of mine, and I guess it is, because nothing has really changed except for the way I feel.  My material circumstances are the same as they were before I went to Nepal.  The mundane problems of life and living, both big and small, continue.  The only difference is within me.  I'm sleeping better, feeling calmer and more self-assured than I have in a long, long time.  I'm not afraid of an uncertain future anymore.  That doesn't mean I'll magically overcome disaster or death, nor do I want to.  I just want to be able to deal with whatever comes my way with grace and dignity.  I want to look good with egg on my face.

Kusali got right into my head, and she's there still.  A day doesn't go by when I don't think about her and the effect she's had on me.  I have only to look at the picture of her staring me straight in the eye and I feel like a worthy person.

It's a small, imperceptible thing, because it's so very personal and could easily be ascribed to wishful thinking or a vivid imagination.  But make no mistake, it's a minor miracle to me.
No doubt about it - I met a goddess in Nepal.
- G.P.